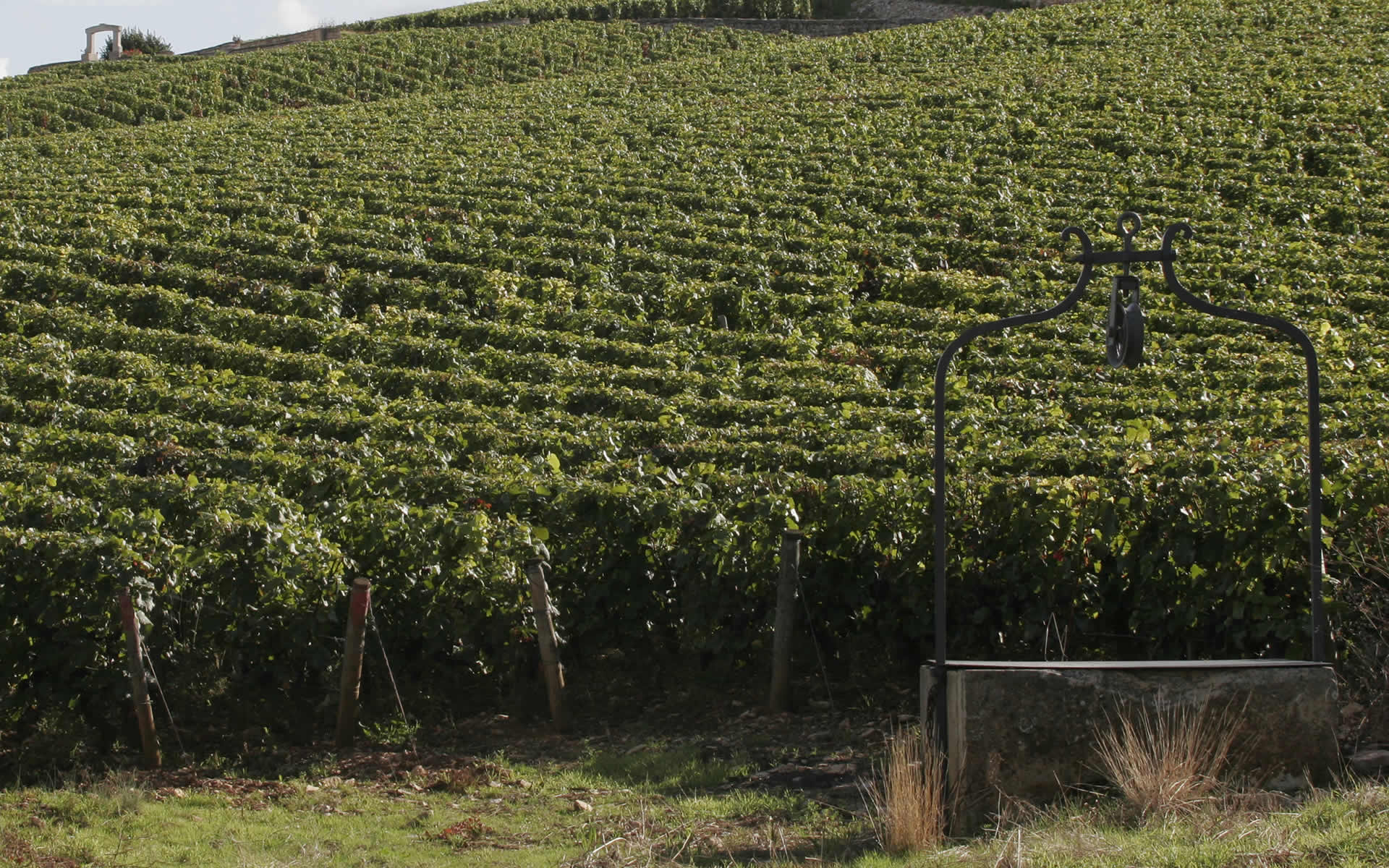 Behind the old dried-stone walls

We invite you to discover and tour the heart of the village of Morey-Saint-Denis to connect you to its history and legacy. Take the time to walk on the limestone paths along the walls. Further down the hillside, close to the village well, a milestone commemorates the founding of the Clos in 1365. Up at the top of the hill, an iconic arched stone gate leads way to 202 “ouvrées”, or plots of land (8.66 hectares) owned by the Domaine. On a clear day, the Alps cut a sharp silhouette in the background.

Contemplate the undulations of the nearby rolling hills, covered by vines growing from a topsoil composed of limestone and rich, red clay. Year after year, the vines produce, according to the nuances of the vintage, an elegant Pinot noir that will age over decades. 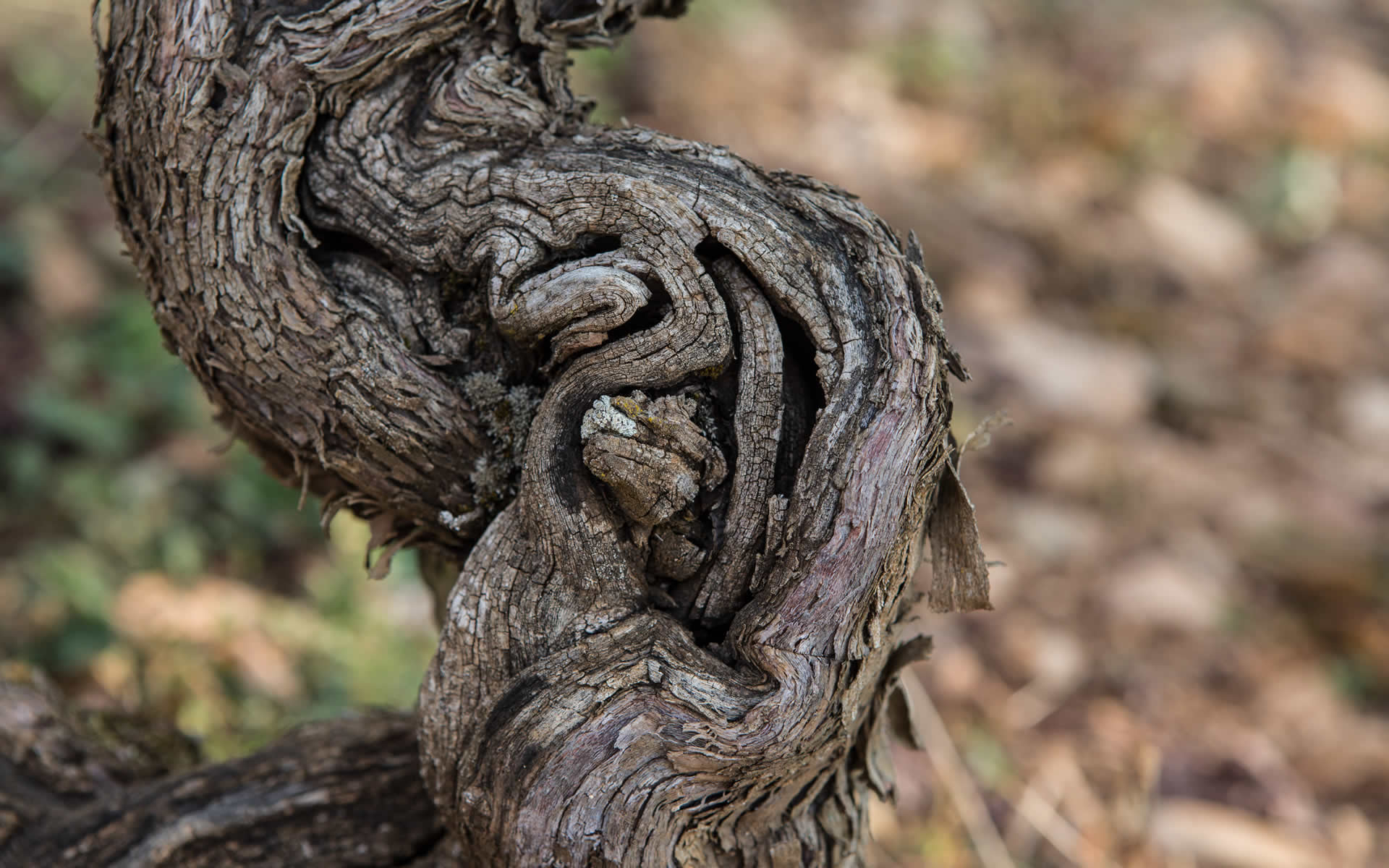 The Clos des Lambrays benefits from an especially unique location. This Cru is a “haut-lieu”, an emblematic point within Côte de Nuits. The smooth slopes of the hillside are subjected to different and complex sun exposures where the vines have been planted and grown for 30, 50, 60 years, or even longer. The size, width and amplitude and the topographical diversity of these slopes give the Pinot noir an optimal and varied terroir. 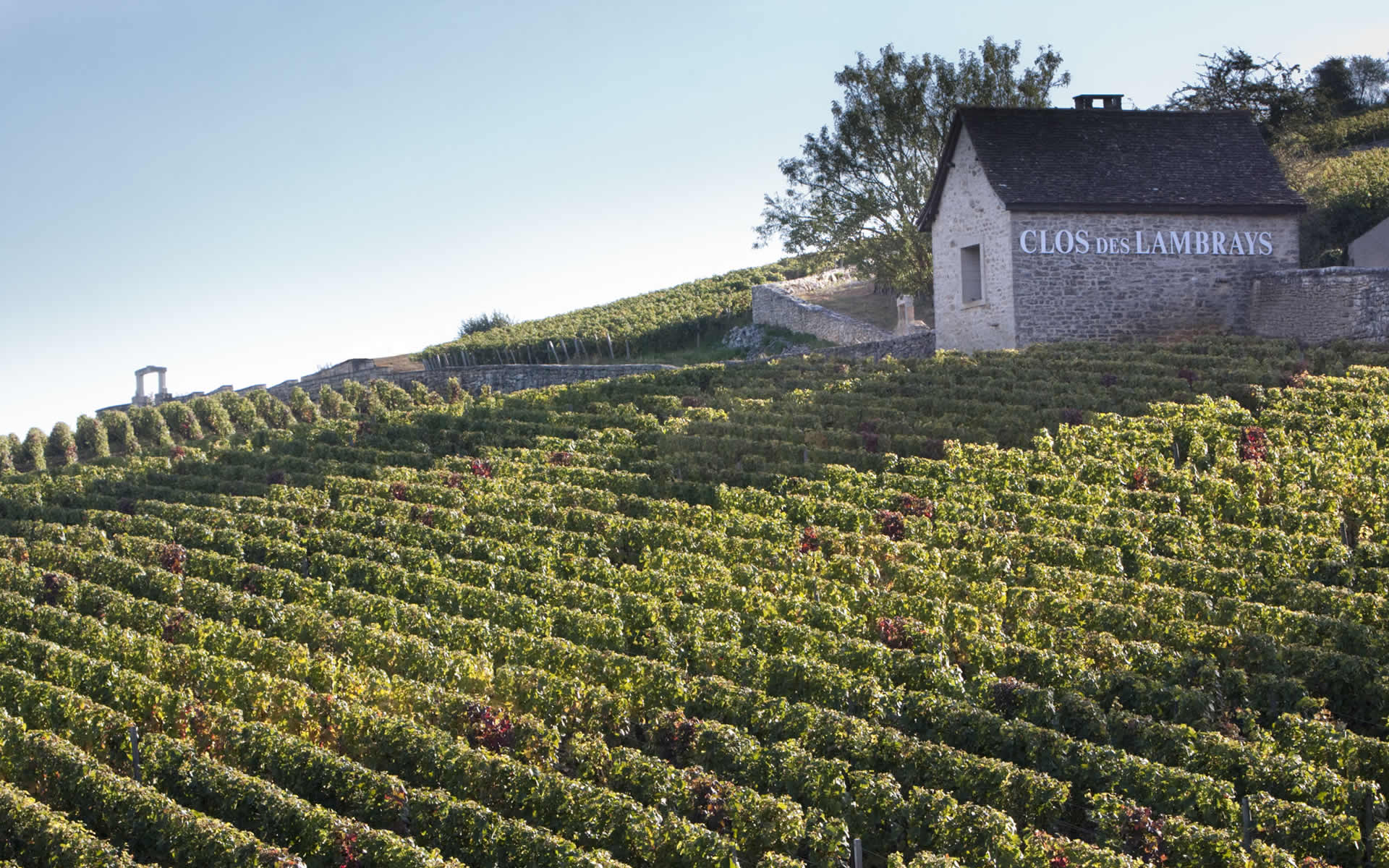 In Bourgogne “climat” and “lieux-dit” are not the same thing. The Clos des Lambrays encapsulates the essence of Bourgogne vine philosophy. What better way to dive into a special and alluring culture, with its own language and own code, than to taste it? Within the Clos, one “climat” - a traditional terroir linked to a specific wine – provides the foundation for three vineyard areas: Les Larrets, Les Bouchots & Le Meix-Rentier.

On a steep slope with shallow topsoil, Les Larrets brings elegance and finesse to the Clos des Lambrays. Le Meix-Rentier is at the bottom of the hill, composed of a deeper bed of soil. It is the backbone of the wine. Les Bouchots is on the northernmost section of the vineyard, at the exit of the Morey Combe, and its fruit is usually picked at the end of harvest. All three components enrich the final wine with subtlety and several distinct facets. Whoever the winemaker, whatever the style of winemaking, the character of the wine is irreplaceable. 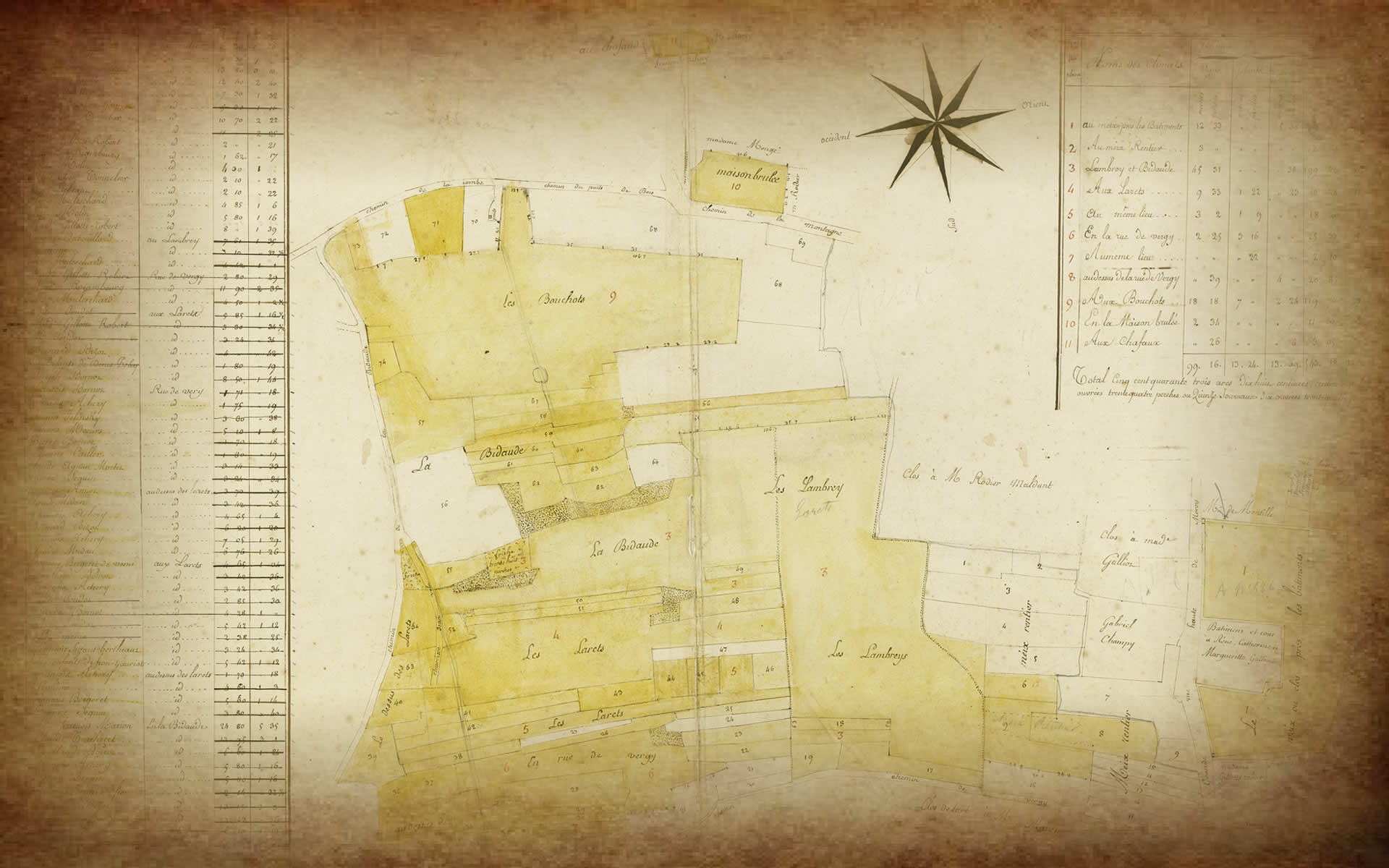 The very first reference to « Clos des Lambrays » traces back to the fourteenth century. Archives of the Abbey of Cîteaux reveal its founding around 1365. An engraved milestone, still in its original location, commemorates the founding. After the French Revolution, the Clos became extremely fragmented. Based on the archives and maps of the vines owned by the Domaine, the survival and recomposition of the fragments of the Clos des Lambrays was due in large part to the strong vision and willpower of its different owners during the nineteenth and twentieth centuries.

In 1936, when the first appellations d’origine are issued, the Clos des Lambrays was listed as a Premier Cru However, this proved to be a misnomer as the wine was always considered to be a Grand Cru by experts. 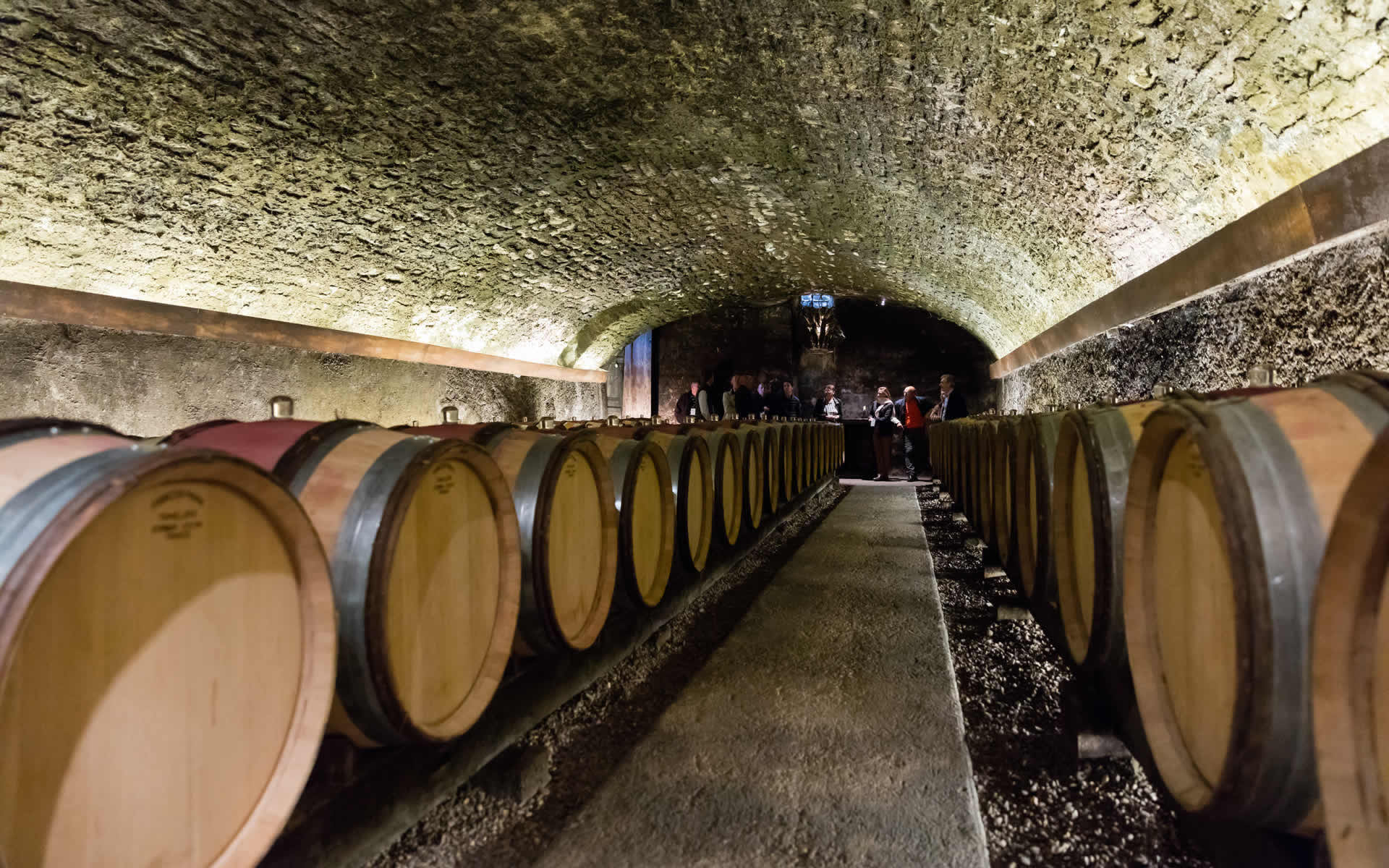 During the 1930s through the 1980s, the Rodier family’s determination helped the Clos des Lambrays recover its official Grand Cru status, a status it had always held de facto. And a status which wine lovers had always recognized. Finally, in 1981, it received official status after the French National Institute in charge of Appellations d’Origine to decree the Clos des Lambrays as the 33rd Grands Crus of Bourgogne

Since 1979, the Clos des Lambrays has been blessed with both a succession of passionate vinticulters and good fortune. First Mr Louis and Fabien Saier along with Mr Rolland Pelletier de Chambure and then the Freunds, since 1996, have kept the property in pristine condition. In 2014, the property, identified as one of the jewels of Bourgogne, was acquired by the LVMH Group. 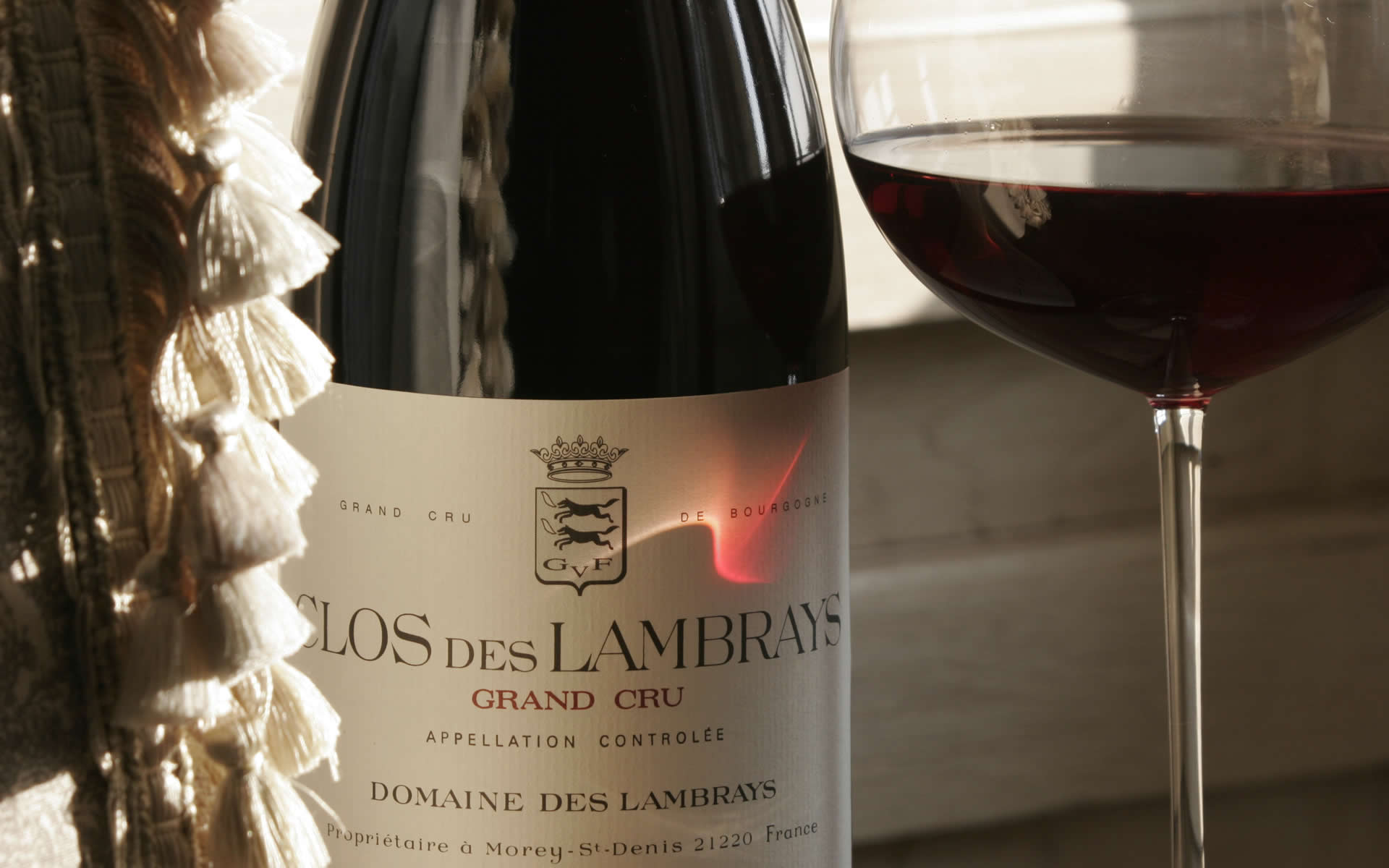 First half of the XXth Century

Good weather in spring and summer of 1918 account for the solid base of this vintage, or “millésime”. But even if a disappointing autumn prevent the 1918 vintage from becoming an overnight success, the great terroirs begin to make a name for themselves during this era. The Clos des Lambrays proves itself to be a truly singular and vibrant wine and receives a favorable ranking, placing it among the elite of Côte-de-Nuits. This memorable vintage is the oldest one in our cellar.

This vintage is the definition of gold standard, or “grand millesime”! The year 1937 was marked by sunny weather from spring through the harvest, tempered only by occasional scattered rainfall. 1937 is a testament to the possibility that human influence may be irrelevant, leaving only the magic of the wine. Eighty years later, this wine is the benchmark of the golden age of Clos des Lambrays under the ownership of the iconic Camille Rodier. Bourgogne wines from this period are extremely rare.

The “Bourgogne miracle” is not a new concept. A severe, late spring frost combined with a summer drought gave birth to a limited but delicious harvest. From its very beginning, the Clos des Lambrays 1945 is unique. Again, the vineyard’s heritage and the History of the world converge, as if men and vines could communicate. This long-term ageing vintage was part of the selection of wines presented to obtain the official recognition as a Grand Cru in 1981.

In Bourgogne Indian summers are legendary.
In 1966 mediocre Spring followed by a so-so Summer are balanced by one of these mild
after-seasons. Nevertheless, acidity remains
the dominant character of the vintage.
A subtil evolution perfume with notes of cooked fruits and game is followed by a mellow mouth. If the wine has now passed its best, its greatness during many decades is a testimony of the aging capacity and the complexity of the Clos des Lambrays across time.

A lovely year with plenty of sun. 1971 is a great souvenir for the vintners even if the crop was small. Impact of the warm days on the fruits had to be controlled. The Clos des Lambrays distinguishes itself by the ripeness of its fruit. Its aromas are moving towards toastiness and spiceness.

“And why couldn’t we sometimes get lucky?”, Roland Pelletier de Chambure half-jokingly asked Thierry Brouin as they were sipping their wine. A few years after they took over the estate, the perfect balance of quality and volume is achieved. Production is only three quarters of what it is today and the harvest takes only two days at the time of the autumnal equinox. A new era begins.

This year will remain in Bourgogne's history as an exceptional vintage. The Clos is at its top, as well as the other Grands Crus. With its very low yields, the wine offers ripen red and black fruits aromas, combined with hints of spices. Its power is
one more characteristic to be added to its legendary elegance.

The Clos should be nurtured, with special attention to the fragile elegance of its terroir or the wine may lose its balance. In 2003 violence came in the form of an extraordinary summer heat and memorable drought, forcing an especially early harvest which began on August 24th - a record. Submitted to these extreme conditions, the Clos, thanks to its old vines and diversity of sun exposures, proved to be resilient. Wine reveals finesse and classicism.

By the end of March, signs of an early spring were encouraging. Bourgogne vintners allowed themselves to believe that a better crop was coming than in past years. But on April 28th, a frost tragically damaged most vineyards - but the Clos des Lambrays escaped unscathed. A hot and dry summer extended through September, leading to a bountiful harvest. 2016 is a survivor vintage with a promising future. After being picked and put into barrels, this wine has already been well received.